RFID and NFC - what is contactless technology and digital theft? 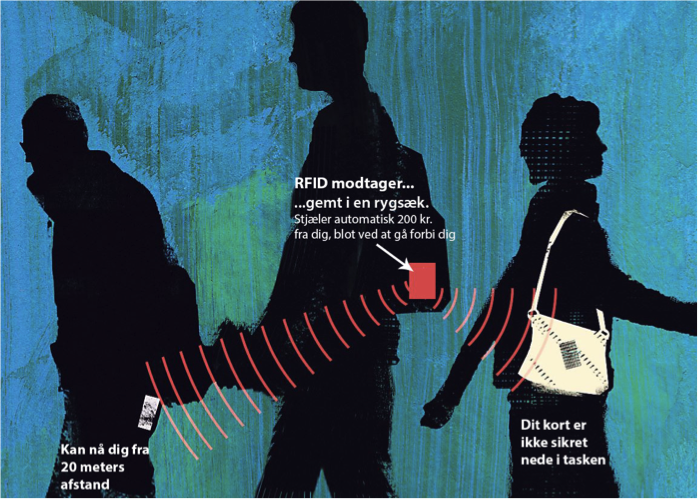 RFID stands for Radio Frequency IDentification and it’s a technology that uses radio waves to identify people and objects. You are identified via a tag, which is an electronic gadget / a computer chip with a kind of wireless barcode. It is read by an RFID reader.

RFID tags can be either active or passive. Active means that the tag is powered by a battery, and it allows the tag to be read at a longer distance (up to 100 m). Our mobile covers and our anti-skimming cards are all equipped with an active RFID tag.

A good example of an active RFID tag is your automatic road payment systems like Telepass in Italy, BroBizz in Denmark, Total in France, Toll4Europe, Eurotoll and Tolltickets in Europe.

An RFID tag can also be passive which is without power. It could, for example, be a tag in a library book. Passive tags can only be read up close.

It’s the RFID technology that is used in your contactless credit cards among others. Contactless credit cards have become popular, and it is illegal software to get hold of your card information hence as well. You can now scan and copy data up to 20 meters away from RFID credit cards. So, you can easily be robbed, even if you take good care of your purse deep in the bag.

NFC means "Near Field Communication" and is shortly told a technology that allows you to communicate with other devices that are within close physical reach.

The technology behind NFC and Bluetooth is almost the same, however, NFC uses much less power and has a significantly smaller range. NFC is also significantly faster to connect to. There is no manual connection, which means that NFC connects as soon as a compatible device is within range. This results in lightning-fast connection times as low as 0.1 second, which is extremely advantageous in the supermarket, for example. At the same time, however, it makes us all easy victims of potential digital theft.

Video about RFID vs. NFC

If you have a contactless credit card, you are at risk of being exposed to digital theft. With the contactless payment cards, everyone can therefore use your card for purchases under DKK 350.

According to a study by the Danish Crime Prevention Council, more than 34,000 Danes had their identities stolen in 2015 and the council estimates that approx. 150,000 have been exposed to cybercrime. These numbers have probably risen.

You are at risk of being exposed to digital theft as long as you have your credit card and other personal cards on you. Even if your cards are in your wallet or purse. In fact, the risk of being robbed is enormous, as in many places you are extra exposed. On the subway. On the bus. At the concert. In the supermarket. In the mall. With the right tool, criminals can easily and quickly steal money and personal information from your cards with a so-called RFID scanner.

Protect yourself from digital theft

Our mobile covers have active RFID protection. The wireless RFID signals that your card emits can be blocked if you store your cards in one of our anti-radiation covers. The special built-in membrane, which also reduces mobile radiation, ensures that the RFID signals are blocked by the cover and thus cannot be read by outsiders. Protect yourself, your money, personal information, and your mobile with one of our anti-radiation mobile covers.

Likewise, our anti-skimming card has protection against unwanted NFC and RFID activity. You can use this in your purse and secure yourself wherever you store it.