How our anti-radiation products work

1. Products that shield the user

Our popular mobile and tablet covers shield and redirect the mobile radiation, as the protective membrane is built into the front of the cover. When you talk with the mobile cover closed in front of the screen, the rays are prevented from going in the direction of your head and your body. Therefor the mobile cover forces the mobile radiation rays to be sent in other directions - backwards, upwards, downwards, and out through the sides - in the direction away from you. In this process, the signal strength is reduced only minimally, while the radiation in the direction of body and head is reduced by up to 86%. For our tablet covers, this applies to 55%, as the screen must necessarily be visible during use, and the protection in this case is downwards and backwards against your legs.

The technology is also used in our surf blanket, computer sleeve as well as in our mobile and baby monitor bags.

The products have a built-in membrane that, among other things, contains metal fibres that act as a shield between the device and the user and reduce the radiation by between 60% - 97%. The same membrane is also used in the aerospace industry, in GORE-TEX and in workwear for radiation environments.

2. Products that create distance to the user 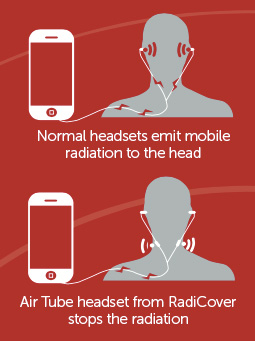 Our popular headphones create the necessary distance to the device. Mobile phone radiation decreases in proportion to the distance you keep the device away from your head or body. Ordinary headphones also create distance, but the built-in copper wire sends the mobile radiation directly into your ear and head, and the distance therefore has no effect.

Our Air Tube headphones are based on a patented technology that reduces 99.9% of mobile phone radiation. The secret is that the last 15 cm of the cord consists of a thin trachea, through which the sound is transmitted, while the mobile rays remain in a closed system (the ball) on the cord itself. (see graphic)

Our products are tested via a combined SAR and TRP-test. The tests have been performed and documented by leading laboratories in the world, including Cetecom in the USA / Germany, Delta in Denmark, and Verkotan in Finland. The Danish National Board of Health has reviewed our documentation and has acknowledged that our tests and test principles live up to their requirements. See the test rapports here.