We live in mobile and wireless times. In other words, today's number of mobile phones, smartphones and other wireless devices Worldwide is expanding at a rate unlike most other products. The reason is obvious. Consumers love the freedom and extended mobility gained from both well known products as well as all the new innovations introduced almost daily at a raging speed. Also, a whole new field of apps and on-line entertainment has sprung from this along with consumer’s demands and expectations of being on-line around the clock.

Particularly over the last 4-5 years since smartphones were introduced to even young teenagers this new mobile culture has completely changed our social behavior.

The illustration below showing the explosive rise in number of wireless devices and the following radiation is yet a reason to take every precaution possible to reduce mobile radiation.

+400 % growth in number of wireless devices in Danish households:

Looking at the overall increase in number of wireless devices in the average Danish household the illustration below describes this estimate:

Source:  BFE, September 2013 - the Danish branch journal for consumers and electronics
If anything, this explosive growth proves the general tendency towards a wireless society.

Broadband installed in 76% of all Danish households

Besides, according to the BFE, "76% of all Danish households have broadband installed using WIFI - half of these also have smartphones".

Additionally, with all the new products being introduced at international electronics fairs, a virtual boom can be predicted.

In fact, innovation is on the rise like never before. The British celebrity chef Jamie Oliver and household brand Philips recently showed a kitchen appliance which prepares and cooks a meals Simply by downloading the recipe from an app, send it to the appliance,  and adding the ingredients the kitchen appliance will do the rest.

The illustration below shows an average Danish home by 2017 with +25 wireless devices. Coffee machine, dryer, oven, thermostat lighting etc. all are connected to the wireless network and thus the internet. 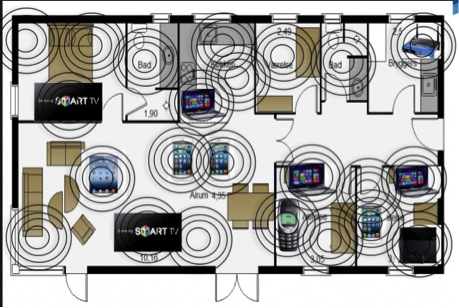 The development of mobile and smartphones

Thus, the market for wireless devices (incl. mobile phones and tablets) is in no way saturated and a continued growth can be expected in years to come. 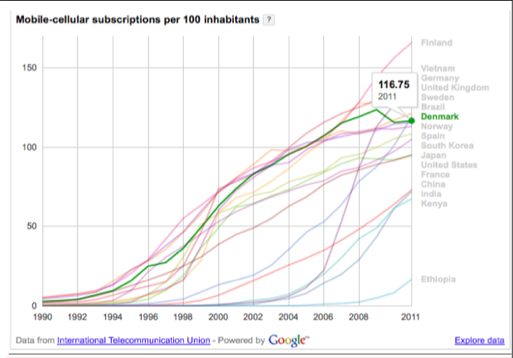 The figure shows number of mobile phone users per 100 inhabitants in various countries.